Emission-free: Enercon is the first one to use the new way of rotor blade assembling 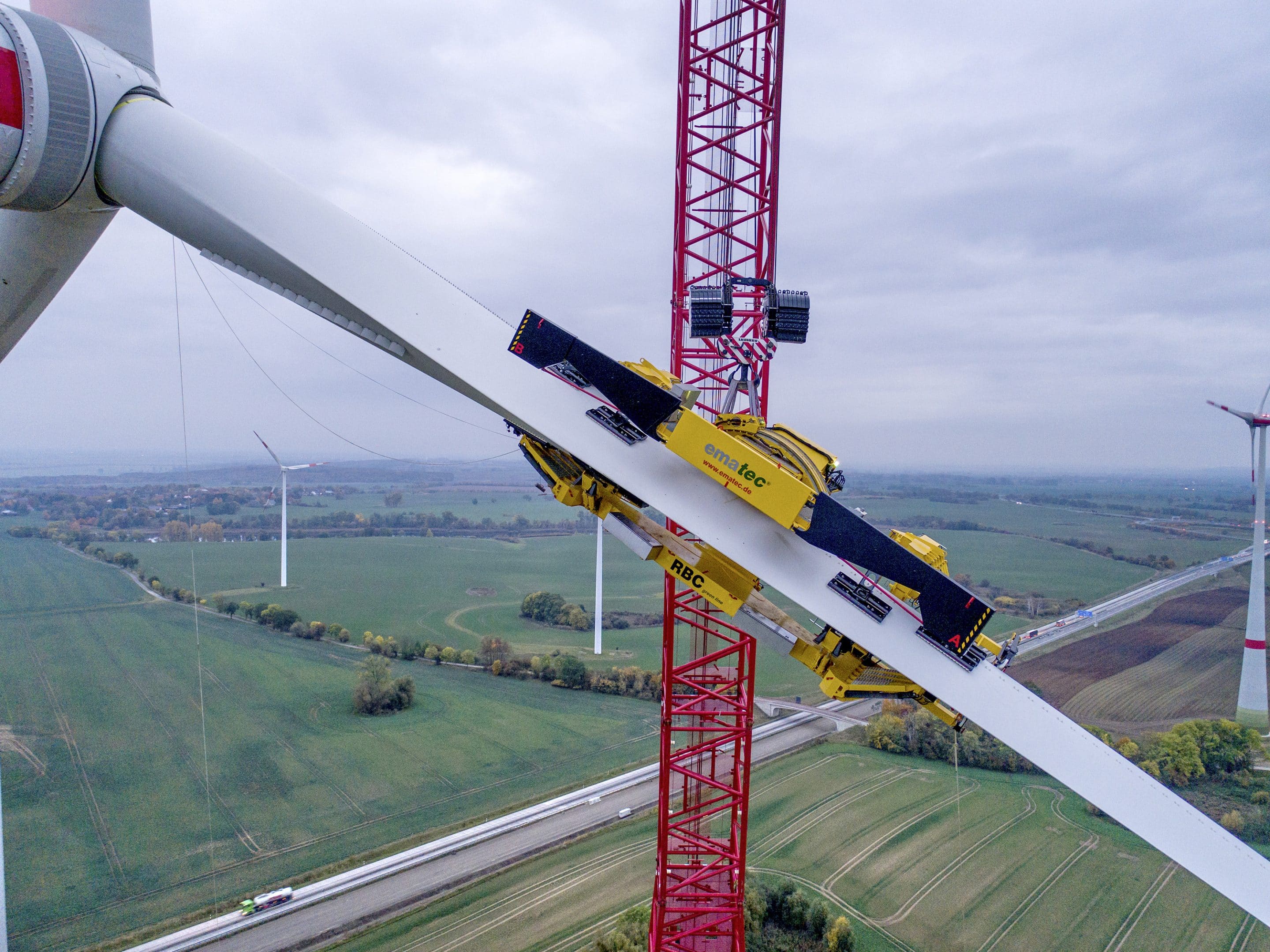 The so-called RBC-D-Green-Line rotor blade lifters from ematec are completely battery-operated and, thanks to a redundant double drive system, they work absolutely fail-safe. They are considered to be the most innovative and universal traverse systems on the world market for the single blade assembly of wind turbines. As the first manufacturer ever, ematec has succeeded in developing rotor blade lifters that automatically adjust and balance themselves to the respective rotor blade. In addition, the RBC traverse systems are the only ones that are able to take on all currently available rotor blade types from 45 metres to 110 metres. For ematec, the order from Enercon is the largest single order in the company’s 23-year history.

“This order is just amazing! It’s great that Enercon is working with us to set a new benchmark on the world market. Our RBC lifting system is really unique in terms of its technical features and it will revolutionize single blade assembly from the ground up”, says Manfred Eberhard, CEO of the ematec AG. The innovation pioneers situated in Southern Germany’s Allgäu region invested around 1.3 million euros in its latest development, without having a specific customer order behind it. Quite brave – or risky like “hara-kiri”, as Eberhard describes it. „But somehow we were just sure that our idea would work“, the head of the ematec board continued.

Enercon wants to use this potential consistently. The first rotor blade lifter is to be delivered by the end of March, then each additional one will follow every month. A tight schedule. “This is a real challenge for our company. But we are ready to take it on” emphasizes Eberhard. His company has a lot of experience in the construction and development of rotor blade lifters. So far, a total of 17 ematec rotor blade lifters from earlier series are in use worldwide for the installation of wind turbines, among others at Nordex and Siemens Gamesa

The new traverse systems RBC (for Rotor Blade Clamp) and the double version RBC-D now overshadow everything that has come before. As the world’s first rotor blade lifter, they are able to grip all blade shapes available on the market without having to do any modification work – including future ones. This is made possible by an automatically adaptive blade support plate, by which it is possible for the lifter itself to precisely adapt to every rotor blade shape. A patent has been applied for this technology. The new rotor blade lifters are able to grip and handle blade weights of up to 40 tons. The double version RBC-D is able to handle blade weights of up to 35 tons. Another extraordinary feature of the RBC series is its tilting angle of ± 30 degrees. The new type of rotor blade lifters can be universally used in the wind power industry – both onshore and offshore. With a slope height of just 3.5 metres, the RBC series facilitates crane management, especially with regard to the constantly increasing hub heights of wind turbines.

Particularly gentle to the rotor blade

The „D“ in RBC-D stands for „double“ and means that in addition to the lower telescope gripper, also the upper gripper is equipped with fourteen hydraulically driven and gimballed grip pads. These grip pads adapt to the individual blade shape like fingers of a hand. If is not just a gripping in the classic sense, but rather a gentle but safe clasping of the rotor blade. The special feature: Thanks to a very homogeneous load distribution with a contact area of approx. 10 m2, the blade stays safe. This large contact area makes it possible to tilt the rotor blade ± 30 degrees without the need of an additional safety rope.

To ensure a safe handling of the rotor blade, the RBC is always able to define its precise center of gravity. Two counterweights located on the two wings of the rotor blade lifter automatically adapt to the point of gravity – with or without a rotor blade. As a consequence, there will be no uncontrolled movements which may harm the blade or which could interfere with the lifting process, even when the gripper has been opened after having been mounted to the hub. Due to the round arch design of the traverse system, the RBC and RBC-D always stay perfectly in the center of gravity even when tilted by ± 30 degrees. The same applies to the pitching of the wing by a maximum of ± 8 degrees. Hence, an uncontrolled movement of the lifter when being tilted or pitched is impossible

In order to be prepared for all kinds of weather and to be able to carry out assembly projects especially in winter, Enercon ordered from ematec all RBC-D traverse systems with special pads. In this version, the rubber grip pads have a coating specially developed by ematec, which even enables a safe gripping of dirty, wet or icy rotor blades. “Rotor blade assembly is therefore no longer as dependent on the weather as it used to be. Enercon thus minimizes the risk of long downtimes and enormously reduces construction site costs. Particularly in Scandinavia, wind turbines are usually installed in winter and assembly workers have to deal with icy rotor blades everyday. This is not a problem for our specially-coated grip pads”, emphasizes Eberhard.

It takes less than 15 minutes to grip the first blade

The rotor blade lifters of the RBC series are very fast to be set up. They are ready for use faster than any other traverse systems. After their arrival at the construction site, they automatically set themselves into the operating position. In addition, the process of gripping the rotor blade is made automatically via the selection of the blade type on the display. Almost unbelievable: The RBC rotor blade lifters need less than 15 minutes for these two steps – and then they are good to go. “That is an amazingly low set-up time. Thanks to this enormous saving in time and cost on the construction site alone, some of the RBC rotor blade lifters may already pay off within one year”, explains Eberhard.

Also when it comes to the transport dimensions, the lifters RBC and RBC-D from ematec cannot be beaten. They stand for pure compactness. With their transport size of 13.2 m x 3 m x 3 m (L x W x H) and a dead weight of approx. 25 tons, the rotor blade lifters can be transported with a permanent permission according to the German road traffic act § 70 StVZO. Expensive special permits and long lead times for logistics planning are no longer required. The RBC rotor blade lifters may reach the construction site within one day.

In terms of the drive system Enercon relies on Green Line

The six rotor blade lifters for Enercon get their power – perfectly suited for the regenerative wind industry – from an electro-hydraulic unit with battery. The Green Line version works emission-free and hardly makes any noise. The RBC traverse systems from ematec are one of the first world-wide battery-operated, emission-free rotor blade lifters that have so far been used in the assembly of wind turbines. Another special feature: The battery drive of the RBC and RBC-D is effected with double redundancy. Dangerous and costly downtimes in the air are no longer an issue. “This double failsafe was very important to Enercon”, explains Manfred Eberhard.

The RBC batteries are suitable for a temperature of down to -20 degrees centigrade and for a working time of 16 hours. Thus, even with cold temperatures, it is possible to install three rotor blades on one day. With a charging time of approx. 2.5 hours, even an empty battery is quickly ready for use again. Further advantage: Thanks to the ematec Green Line technology, wind turbine manufacturers bypass the stringent emission regulations according to the Euro 5 standard and the US EPA Tier 4 final, which apply for combustion engines since 1st January 2019. Ematec deliberately keeps the electric drive below 24 volts, so it may also be used in the USA thus complying with the demands of the Underwriters Laboratories (UL).

With their simple and efficient handling, the RBC and RBC-D not only ensure process reliability, but also the safety of the staff on the construction site. The hydraulic cylinders of the grippers are equipped with integrated safety valves that make it impossible for the rotor blade to slip out – even if operated incorrectly. The hydraulic cylinders are developed by ematec themselves and are entirely manufactured at the Memmingerberg site. In addition, it is possible to optionally equip each rotor blade lifter with five cameras. The flood lights attached to the RBC and RBC-D perfectly illuminate the work area.

Gripping range:
Individually adaptable to the shape of the blade

Operation:
Radio remote control with two transmitters including a sign-over function for the ground staff and for the hub staff, including a coloured display to show operating status.

Additional lighting:
Three large LED work lights to illuminate the work area, can be switched off via radio.

Accessibility:
Open design for easy access of all components.

Caption:
The rotor blade lifter RBC from ematec which is able to take on and handle all blade shapes available on the market. Picture: ematec 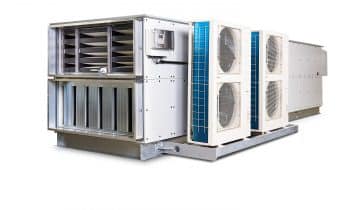 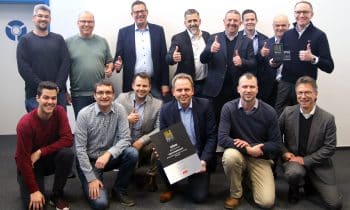 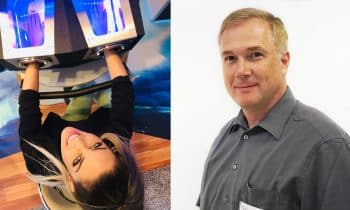 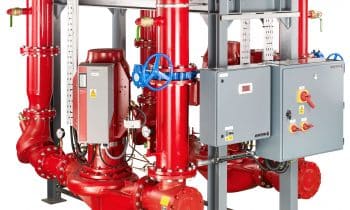 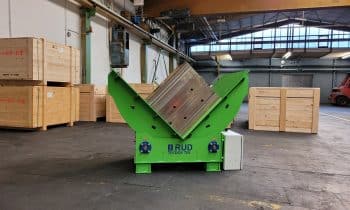 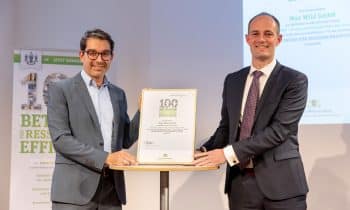 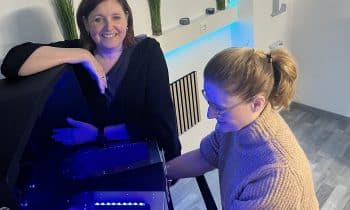 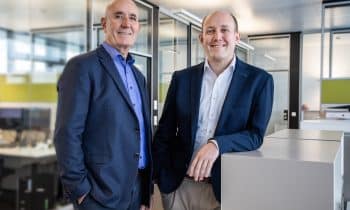